James Schriber of Connecticut bought this lovely, understated Moto Guzzi Ambassador twenty years ago from the legendary flat-track racer and Indian dealer Fred Marsh, who must have been a solid 90 years old at the time.

According to James, the Ambassador was “a re-assembled rusty basket case with a terrible re-paint. I grew fond of the homely Guzzi with its ‘spaghetti western’ styling, but couldn’t live with it as it was—so I took it apart.”

Schriber, a furniture maker, first painted the body a 1970s Fiat pea green, and added low rise BMW bars. “It looked more military than anything else, not my intention. I once overheard a biker chick ask her boyfriend why anyone would paint a motorcycle that color!”

About two years later, Schriber rattle-can-painted the bike Eastwood Chassis Black Satin, which he dulled down with Scotch-Brite for a rat rod look before adding simple red stripes.
“The solo seat is a Harper’s repro unit that I had re-covered in leather, and I replaced the original mufflers with straight pipes with universal baffles. I think I’ll leave it alone for a couple of years—or at least until we see that biker chick again.” 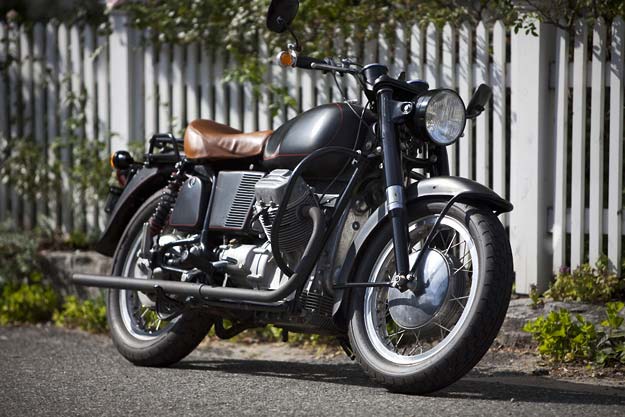